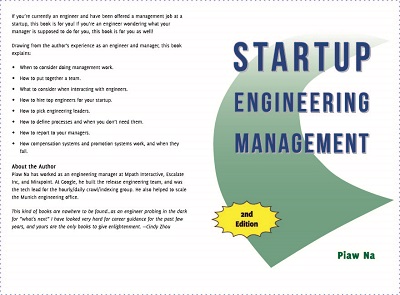 I've been promoted or hired into management at startups at Mpath Interactive, Escalate, and Mirapoint. At Google, I was tech lead for the daily/hourly indexing team, and I also built the release engineering team from ground up a year before the IPO. As an engineer, I've experienced bad managers, good managers, and everyone in between. This book covers topics of interest to who's going to do engineering management at startups, or who would like to know what to expect from a manager in a non-political environment:

This book is not just for management, however. It is also for those engineers who are wondering if their managers are truly doing the best job they can. In particular, the techniques in this book can help you suggest ways to improve your group dynamics regardless of your position, and that would result in an improvement in your operating environment.

Here's Why Engineers Should Read This Book

Corporations have extremely low standards for managers compared to engineers. A lot of this is because in most companies, managers hold the strings: they decide compensation, they figure out who should get promoted, and they figure out the strategic direction. So when they get things wrong, they get to apologize to themselves.

Let's use an extremely well-managed company as an example. Google, as described by The New York Times. The article proudly brags that Google has figured out a way to build a better manager. Yet, if you read the article carefully, here's what you actually extract out of it:

He tells the story of one manager whose employees seemed to despise him. He was driving them too hard. They found him bossy, arrogant, political, secretive. They wanted to quit his team.

"He's brilliant, but he did everything wrong when it came to leading a team," Mr. Bock recalls.

Because of that heavy hand, this manager was denied a promotion he wanted, and was told that his style was the reason. But Google gave him one-on-one coaching—the company has coaches on staff, rather than hiring from the outside. Six months later, team members were grudgingly acknowledging in surveys that the manager had improved.

"And a year later, it's actually quite a bit better," Mr. Bock says. "It's still not great. He's nowhere near one of our best managers, but he's not our worst anymore. And he got promoted."

Think about this: as an engineer, if you were the worst engineer in the company, you wouldn't get one-on-one coaching. You'd get fired! Not only that, even if you managed to work your way out of a performance-improvement-plan, you wouldn't expect a promotion just for not being the worst engineer. Yet this type of performance review process is par for the course, and Google is not by far the worst offender.

If you read this book, you'll learn to recognize when your manager isn't doing his job. If it doesn't impact you, you can let it slide. But if your group's performance could be improved by getting your manager (or your group) to do the right thing, this book will make your work environment just that much better. That's why every engineer should read this book, not just engineers who want to aspire to management or recently promoted engineers. I once worked for a team where the manager did not get the team together for informal lunches. I suggested that the team do that and made it look like her idea. The team's dynamics improved within a few weeks. That's the kind of thing you can do even if you're not a manager.

Differences in the 2nd Edition

Piaw Na has worked as an engineering manager at Mpath Interactive, Escalate Inc, and Mirapoint. At Google, he built the release engineering team, and was the tech lead for the hourly/daily crawl/indexing group. He also helped to scale the Munich engineering office. He maintains a blog at http://piaw.blogspot.com.